A Wild Ride Through the Night

A Wild Ride Through the Night 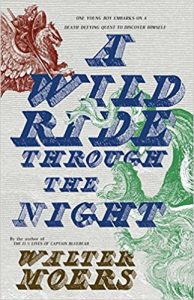 A Wild Ride Through the Night is a novel by German writer Walter Moers.

The story turned out to be an unusual, unexpected, full of allusions to well-known stories and texts and, at the same time, ironic and grotesque. A dreamy teenager, a twelve-year-old captain, gets trapped in a storm arranged by raging Siamese Twins Tornado, and the only one of the entire crew of the ship remains alive. On the empty deck of the ship brother and sister appear (their names usually do not say at night), who bet on his soul and offer him six tasks to save it, thereby determining the future life and fate of the little brave navigator… He must get into the realm of the dead, but certainly he does not want to, so he bets with Death. Do not die, young Gustave needs to complete six impossible tasks. Now the boy has to save the beauty from the paws of the Dragon, go through a forest full of ghosts, guess the names of the five giants, fight the Most Monstrous of all Monsters, meet himself and eventually get the sixth task. Then begins a whirlwind of adventures and events, meetings and dialogues, which can only be compared with Alice’s Adventures in Wonderland by Lewis Carroll – they are same absurd, surreal and ridiculous. All the horrors and monsters that Gustave meets on his way are in fact not so dangerous, a twelve-year-old boy can handle with all the unbearable trials.

The fairy tale by Moers turned out to be amazing – it is interesting and magical. I would not recommend it to little children, most likely to teenagers, and of course adults who can fully enjoy the wonderful humor, interesting thoughts about the universe and destiny, as well as allusions to famous classical texts. This fairy tale is also perfectly illustrated. The author skillfully used illustrations of Gustave Dore and his name (this is the name of the main character of the book), and told a fascinating and full of adventures, a beautiful and slightly sad story of growing up.

Together with his characters, Walter Moers talks about life and death, about magic and the invisible worlds, but (which is very important) does not forget about the irony. Avoiding general phrases seemingly unavoidable in discussions about high matters, the author well intertwines elements of myths and folk traditions, quotes Goethe and, ultimately, offers the reader something of a bizarre and fascinating combination of works by Jules Verne, Miguel de Cervantes, François Rabelais and the fairy tales by the Brothers Grimm.