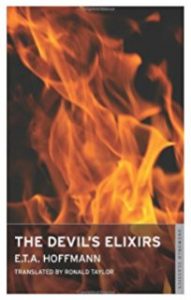 Ernst Theodor Amadeus Hoffmann is famous German writer, composer and artist. In his work, Hoffmann paid tribute to Romanticism and Occultism, and to a fairy tale for adults, as well as to social satire. His works, bizarre and elegant, truly fascinate showing their amazing and fantastic world. It is one of the most interesting and unusual works of the great writer. A masterpiece of the Gothic novel.

The plot. Hundreds of years ago, the devil tempted St. Anthony by offering him to feel an enormous satisfaction, drinking the elixir from his many bottles. St. Anthony managed to fight off the devil, and as a trophy he got several diabolical bottles with an elixir, which were preserved in one of the Capuchin monasteries until the time to which the narrative relates (apparently 17-18 centuries). The monk Medard gives in to dark temptation and tries the drinks. This becomes the first step in the path of his numerous crimes and troubles.

If I had the opportunity to live in someone else’s body for one day, I would like to be a monk. I would like to understand this state of mind when you are constantly thinking about sin and saving, when you can pray for hours and and feel enlightened and after that. I want to know how it feels to consider any of your actions as a sin in beforehand and to feel regret about it and try to atone for your sins. Try to atone not only for your actions, but also thoughts, and even if you just begin to think about it. The Devil’s Elixirs is a story about a monk who could not be a monk. At first it was not interesting for me to read the novel, but by the middle there is a real desire to understand what actually happens. And with each new character and a new information, there are new relationships, new secrets and new crimes. You begin to understand what happened and whathappens, and all the incomprehensible things get an explanation, but these explanations can only be called the fatal series of accidents. Very fateful and very long series. And I was also convinced that I know very little about German literature and Germany as a whole. All these castles, estates, monasteries are somehow very different from those I have become accustomed to read. A bit, but different. Reading the book I understood that the world is very diverse.