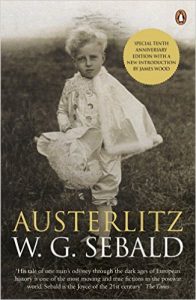 Winfried Georg Sebald is a modern German writer, poet and literary scolar, essayist, teacher of literature in England. The main theme of his work is the theme of rethinking of the world history, searching for historical justice. Sebald is the author of four novels, numerous essays and articles. The novel Austerlitz is the fourth and last novel of the writer, published in 2001. A few months after the publication of the book, the author died in a car accident. Some literary critics try to put Sebald’s work on par the works of Proust, Kafka and Nabokov. It is completely useless. Sebald is a new phenomenon in German literature. Only time can evaluate his work.

The book is very unusual. It is the first book in the last few years, which I had to reread sometimes to realize what I just have read. The book contains a lot of information that satisfies my architectural curiosity, and a lot of thoughts, and details about the most diverse aspects of life… It is also written in a very uneasy form – in consists of the long sentences, the thought in which goes so far from its beginning that It becomes almost unimportant, how much real sentences could be here. The story of Jacques Austerlitz, about which the nameless hero tells us, is a complicated sad story of a man looking for his roots, fragments of which there are all over Europe. The plot of the novel, at first glance, is quite simple. Once, in Antwerp, the nameless main hero of the novel meets with the weird man Jacques Austerlitz. They bagan to talk. In fact, the whole book is a dialogue of two heroes, but the speech of Austerlitz prevails. He is a tireless narrator with a huge range of interests, including modern and ancient architecture, engineering and world history. He knows a lot of facts about the construction of railway stations, bridges and engineering structures. Adding to the text a series of black and white photographs of a variety of subjects (from photo stations to photo tombstones), the author gives to the novel a kind of note of documentary. Austerlitz is very remarkable. Born in the Czech Republic, he was taken to England in 1941 when he was five years old to be saved from the the fascists. And having lived for forty years in England, he was completely unaware of a his origin. Austerlitz decides to find his roots. He goes to the Czech Republic, France, Austria and Germany, and, at last, finds his origin. This story of his investigation he tells an anonymous hero, and he tells us. This is a double narrative, a retelling of the story of Jacques Austerlitz.