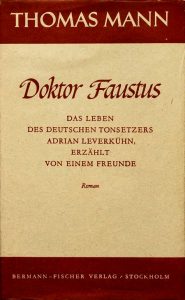 Doctor Faustus is a novel by Thomas Mann, published in 1947.

The novel talks about the life of a fictional character, Adrian Leverkühn, from a very young age to his untimely death. Leverkühn is a talented musician, a German of the early twentieth century – deliberately makes his life according to mythical motifs reminiscent of the German medieval morality about Faust, who signed himself over to Mephistopheles. While Leverkühn, inspired by demons, is approaching his judgment day, German society takes a political course toward Nazism. The life’s journey of Leverkühn echoes the biographies of many other outstanding personalities, and in ideological terms it corresponds to the fate of German culture in general, as Mann perceived it during the Second World War.

This book for me – a person who does not even have elementary musical education – has too much specific terms, words concerning music theory and musical fragments, which should sound as beautiful melodies in the reader’s head, but it was only as a white noise of boredom and misunderstanding. Still, the story impressed me greatly, especially the ending. But it’s not just because of an emotional dramatic plot. There is something more behind the story of the composer who made a deal with the devil, or rather with himself. It is said that Mann depicted the tragedy of Germany in the first half of the twentieth century. That’s true, but you should understand that not only historical events are shown here. Much more attention is paid by the writer to the changing of worldview and attitude of people. He makes it through the narrator’s digressions and monologues of secondary characters. However, the author achieves a greater impression indirectly, just depicting the life and creative path of his hero Adrian Leverkühn. He partially isolates him from the outside world, makes him to experience the inner passions on his own and gradually turns a good young man into a genius monster who is capable of refuting all the kind and noble by music.

Now about the book, which impressed me by its depth. So, what we have: firstly, the memories of the retired gymnasium teacher about his friend Adrian Leverkühn in the backdrop ofthe Second World War; secondly, there are many references to musical works and the construction of musical compositions, both of famous composers and the narrator himself; thirdly, politics, art and philosophy discourse; fourthly, there are very lively, realistic characters and colorful landscapes; fifthly, there are a lot of long phrases and sentences that encourage slow reading and reflection, there are few dialogues, which makes the text heavy. In conclusion, I want to say that I’m glad to get acquainted with such a wonderful master of great prose as Thomas Mann and I will certainly continue my acquaintance with the rest of his novels. I think they will not be worse, but maybe even better than the novel already read.