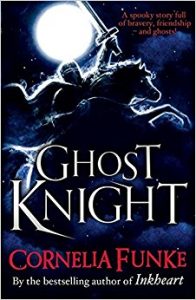 If someone wants to write a fascinating book for teenagers, he should write it exactly in that way as Cornelia Funke does. She imagines the most common character in a typical, although in difficult family situation, puts him in the most incredible circumstances, creates an interesting plot that cannot be predictable. But in the book Ghost Knight she made everything even more interesting, because the story, filled with terrible ghosts, mediums and exorcists, is placed near to real historical scenery. However, let’s consider everything in order. Jon Whitcroft is 11-year-old boy, who has to go to a boarding school at the very beginning of the story. He doesn’t like this: it’s all because his mother decided to marry again. Jon hates his future stepfather, life in the boarding school, and the whole world. Meanwhile, it takes very little time, and these problems seem completely insignificant to Jon, because it turns out that three ghosts will come for his life.

Cornelia Funke places her characters in a real city – Salisbury. She describes in detail the sights and features of the city, tells the story and the structure of the building in which the boarding school of Jon is located. The characters of the book, from the distant ancestor of the protagonist to the ghost knight and his ghost wife, are also not invented by the author, they are real historical figures whose details of life are also shown. In addition to them, a lot of information will be said about the world of the English Middle Ages, about certain monarchs of the British Isles and their complex matrimonial relationship.

By the way, do not be afraid that the novel will be too boring for teenagers because of the abundance of the historicism, Funke manages to be fascinating and exciting, even telling about why Henry VIII finished all abbeys. How does she manage it? Not only with the help of constant whirlwind of events and dangerous adventures. The point is that her heroes are very different, their characters and feelings are diverse. William Longespee, called to help Jon, is not a knight free from fear and reproach, but a man with a difficult destiny. The friendship of the main characters – Jon and Ella – is experiencing its ups and downs, because they are just children and both have difficult times. Even secondary characters – teachers, neighbors of Jon, deserve full attention, because each of them plays important role and helps to feel a whole range of feelings, among which there are friendly support, disappointment and fear.