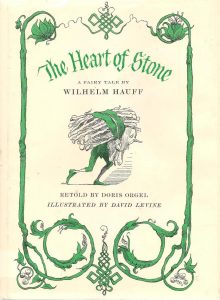 Heart of Stone is the most romantic work of the famous German storyteller Wilhelm Hauff. Young coalman Peter Marmot dreams of wealth and he is ready to do anything to get it… even to give his heart. Heart of Stone can be easily called the best work of Hauff. As a true German, he glorifies the work! In addition, this fairy tale is more relevant than ever. Although the fairy tale was written in 1827. A heart of stone does not mean that a person doesn’t care. A heart of stone is a complete indifference, endless cynicism.

The fairy tale Heart of Stone tells us about a man named Peter Marmot. He lived in Germany in the the Black Forest. His father died when the boy was 16 years old, so his mother said him to work as a coalman. But his life changed in one day. He met the small Glasmännlein ( the glass dwarf) that had to fulfill his three wishes. The first two were very stupid ones, and brought him nothing, but harm. Another character of the fairy tale was Holländer-Michel. He proposed Peter to replace his real hot heart with a heart of stone. But it also brought Peter nothing good. This fairy tale tells us that is it bad to indulge your thoughtless desires. You should not be envious, but you need to achieve everything working hard.

It is a magnificent fairy tale. About how to become happy without outside interference. A cold, calculating and gloomy businessman becomes more humane, if there is a friendly and positive person with him. With the help of magical events, Peter Marmot  was able to be both of them. Here is a very fine line – when money becomes the meaning of life, it cease to bring joy. And accordingly, on the contrary – when every copper brings joy, then it is very difficult to earn it. The story of Peter Marmot  is exceptional, because he is the only one who has been both bad and good person and has not lost his mind at the same time. But, that’s why fairy tales exist. Among other things, unknown always attracts people, but having been both the poor and the rich person, what happens in life sometimes, an ordinary person evaluates both states by the same measure. So, he will never find the balance. This fairy-tale in a unique way makes everyne more human. And it is a consolation for those who need money.