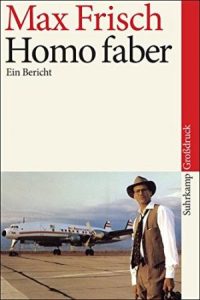 Homo faber is one of Frisch’s key novels. In this book there are the motives that will later become leading in his work: the loneliness of human being in the world, powerless over the terrible destiny, no opportunity to change one’s destiny and, most importantly, the theme of duality. The main hero of the novel, Walter Faber, traveling, meets a girl and falls in love with her. This plot move receives an explanation on two levels of perception – realistic and philosophical…

The main character Walter Faber is a pragmatic engineer, a rational person, he does not read novels, but only special literature and newspapers, he does not go to museums, he is to far from art, but he iknows aircraft brands, steam engines and cars. Engineer Faber is not passion person, therefore in order to awaken his feelings, events are necessary to be very severe. The main hero will know love, which is not comparable in strength and depth with anything experienced before, survive its loss and feel the approach of death. But not external events are important in the novel, but the internal process of the hero’s realization of worthlessness, the emptiness of his life; he has to realize when he is 50 year-old that his whole life which is rather successful, is illusion and self-deception, and he did not live at all. And the highest literary mastery of Frish lies in the fact that such an abstract problem he presents with the help of figurative characters with brilliant expressiveness. At the same time providing through the novel to the reader an indescribable tragic  and, probably, very personal feeling of life.

Homo faber (Latin for “Man the Maker”) is a novel about a man who create. The creative person does not mean an artist, but a master, he cannot be more materialistic. And yet, some strange things begin to happen to him. In the sense that if some event has a chance to happen, then it will happen. Well, not exactly. There are certain things that happen and their probability is negligible, but they occur one by one. And Faber began to think that something goes wrong. It is easy to live when you are sure that white is white, black is black, that the probability of airplane crash can be measured in percent. The theory of probability works in another way. How to measure the percentage of the probability of constant coincidence? And these coincidences will happen one by one. Faber, will you change, will you believe that life is chaotic and stubborn?

From the first sentence to the last word, this book is fascinating!