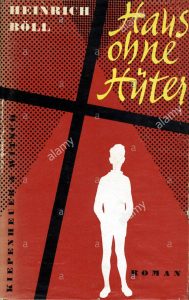 In 1955 the novel House without Guardians was called by French publishers as the best foreign book. It is the story of the first post-war generation, the story of two boys – Martin and Henry, whose fathers died at the front.

House without Guardians is a novel about those who stayed in this very house; about those who managed to return to this very house; and, certainly, about those who never will return to this house. The main characters of the novel are boys who were born during the war, who are not destined to see their fathers; also there are their mothers whose young, full of life husbands were sent the war, and they received only some words about duty and death… Yes, of course, there are still all the rest, young and old, well-bred and not virtuous, they are all trying to return to Life. It’s amazing how all of them, in fact, are lost, abandoned, abandoned, forgotten how to live and feel full. Even those who have not yet had time to learn this, boys whose fathers, who are slightly older than their present, participate in their upbringing from an old photo on the wall.

Good book. It does not have that power that in many books about the war and exploits of the post-war life, there is no obvious grief and sadness. It is another. Without crushing emotions it tells us about the invisible, imperceptible things. About how feel people who survived. How does it feel to return to normal life?! How does it feel to love men who will never smile like that first one, whose son looks at you every day with his father’s eyes?!

The main characters are two friends. They are from different worlds, although both of the category “he lost his father in the war.” They are only 10 years old. Their picture of the world, on the one hand, is very simple, but on the other hand, it is the one that is most objective. There is neither fiction, nor escape from oneself. They have not learned yet. The author gives us the opportunity to feel everything: to hear rustles and sounds, to feel tastes and smells. We, the readers, are the same children, because we were not there and do not know anything for sure. We must all touch to understand. And, probably, still do not understand, but feel. This novel will impress you.