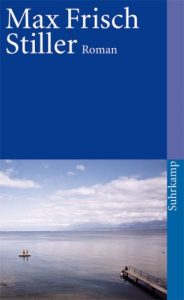 I’m Not Stiller (1954) is a novel about a man who does not want to be himself. The novel is written in a non-traditional manner. There is no sustained actions, it is like there is no minimal order. I’m Not Stiller is written in a form of notes (like some other novels of Max Frisch), the author likes to write this way, since a person can be completely honest only with himself. Life, according to Frisch, is a clash of a man with his own role and resistance to it.

In a quiet and peaceful bourgeois Switzerland, there is a scandal – a man missing a few years ago refuses to admit that he is a he, despite all the clear evidence and testimonies of acquaintances. Not just of a baker from the next street, no. The evidence of his friends, brother, wife – those who knew him, knows him, knows his every gesture. Can all these people be wrong? Or is the defendant lying to them, inventing stories, one more absurd than the other? Who is he? The missing Shtiller? Or not Shtiller, of what is he trying to convince everyone? Here it is, the main intrigue, the main storyline of the novel, reflected in the title and its translations. It’s curious that the English version is called “I’m Not Stiller” and, as for me, it reflects the essence much better than a non-speaking surname. Because denying yourself is the main theme of the novel. During the trial and getting to know people from the life of Staller, we understand how bad he was – he betrayed his wife, harassed her. And to this “calm” and adequate person people are trying to impose the whole past of Shtiller. And you know, they succeeded. This is the tragedy. This new man accepted the old Shtiller. I hope I will not break anyone’s expectations if I say that everything ended bad. And not only he is one bad person in this novel. Everyone is not perfect. The prosecutor, his wife, Stiller’s wife … Each of them has his or her own priblems.

What makes human beings human? What to do if you do not like yourself? Try to change? Well, you have changed, but all the others still think that you are the same person as before. And nothing really has changed. So what defines a human being – he or other people? It’s interesting how Frisch describes Switzerland, its desire for external purity, when even the bars at prison are washed with soap – external cleanliness as opposed to internal problems.

In this novel I have not seen human understanding and internal harmony, freedom from norms, rules, traditions. The main character fights against them, but loses. It is difficult to overcome the monolith of old traditions and installations alone, we need support. In general, everything is bad.