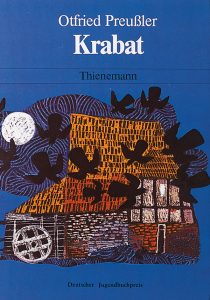 Krabat is one of those tales which fascinate and scare at the same time. It is filled with fearsome but intriguing secrets, ancient sinister magic and symbolism – symbols are essential. And everything is cyclical, goes round, as if symbolizing the eternal cycle, only here it was created and launched not by the universe, it was forcibly included into the real world by the dark craftsmanship of the Master with the support of a stranger in a hat with a scarlet feather. And it can only be broken by light, love and dedication.

Much attention is paid to choice. Even for Krabat it is difficult, although his heart already belongs to another. Temptations, temptations, temptations … Indeed, it is great to have power over other people, to use that power that is unknown to mere mortals. Even immortality can be achieved. But the price is high. But it does not matter for a person with black heart. It is hard to cope with temptations, to make the will stronger, to believe in hope. The fairy tale is written in the spirit of German folklore – it is gloomy, mysterious, filled with an ominous atmosphere. Sometimes the author includes funny episodes. In general, dark colors prevail.

Krabat is a boy, a little orphan who was called out by a strange voice to the mill . Having arrived to the mill, about which there are bad rumors, he realized that it is not so bad here. Why not? He has food, water and a roof over his head. What else does a guy like him need? There are eleven other guys with him. But they are not so happy as Krabat. And still there is a Master who scares everyone… Over time, Krabat understands that the guys were right and it is not so good here, as it may seem at first glance.

In general, the book is good. But it is not a children’s fairy tale. If I read this book as a child, I would be scared. There are many terrible things here. But it will be interesting for teenagers. Also there is not enough dynamism in the most interesting and important parts of the story. The main idea is that true love and friendship can defeat even the most powerful evil.  As a conclusion, I can say that the book is pretty good. I especially like the use of ancient mythology. But I was disappointed by the lack of beautiful words and dynamic plot.