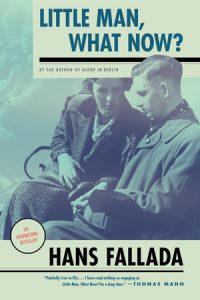 Little Man, What Now? Is a novel by , published for the first time in 1932. The novel appeared in the period of the global economic crisis that has been going on since 1929, which began on the collapse of the American stock exchange on 24 October 1929. The crisis brought misery and poverty to the world and has led to a rapid rise in unemployment. Fallada describes the fate of a “little man” and his wife in Germany during the Weimar Republic.

The story is very ordinary. The ordinary young family is renting a room, waiting for a child, counting money and trying to make their way in the world – with all the forces, but not by any means. Of course, they do not get everything and they do not have much, and yet they have something big and very important – understanding, mutual assistance and love. How they are called, where and when they lived – it’s not so important, because their history is out of time, about eternal values and enduring problems.

Despite the fact that the novel is set during the crisis in the Weimar Republic, in the 20-30s of the last century, it remains relevant for today, and for other countries. It is worthwhile adding two zeros to the sums, changing the currency to dollars, moving for 80 years ahead, and now we are getting almost the same picture with the average family, which is trying to live on its small, honestly earned salary and which is experiencing almost all the same difficulties of life. Perhaps the novel will always be relevant, as long as there is a “shameful, punishable, suspicious” poverty.

It is rather easy book about the difficulties of the family life of small people. I say that it is easy only because the author prudently put it into the form of such an interesting, uncommon and ironic story about the difficulties of the family life. No, it’s true, things that happen to the main heroes – wonderful Emma and the imperfect Penneberg – can not be read without a smile. But the truth is this: the more you start to think about the background of what is happening, the harder the impression becomes. In the ironic situations of those times, you suddenly begin to find a resemblance to real life – a brutal, unbearably painful resemblance. And what next, little man? You move on. Even if this “life” could be called survival.