Mario and the Magician

Mario and the Magician 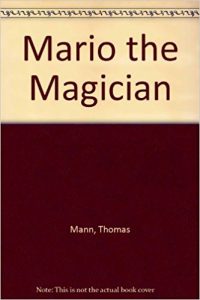 Never read Thomas Mann on the go, in the subway, in buses and at bus stops, surrounded by a crowd of people, big buildings and constant noise. He, like nature itself, requires silence, tranquillity and seclusion. His works – it is a conversation that can not be conducted, shouting out the bustle of life, otherwise one can distract and miss an important thought, in which there will be more meaning than in other multivolume books. Mann is one of those writers who almost never write about what it seems at first glance. If you look at the Mario and the Magician with your eyes only, you will see the story of the resort town in which a strange tragedy happened. But if you lose focus over the plot that lies on the surface, and listen to your feelings, you will understand that behind the drama of the novella there is the tragedy of the whole world. I love Mann because he never speaks plainly. In my opinion, it is difficult to understand some of his works without the specific knowledge.

This novella, in my opinion, is not similar to those works of Mann, which I have read earlier. Mainly because of the style. If I read Mario and the Magician without knowing the name of the writer, I would say that this is a novella of William Somerset Maugham: it is written in the perfect manner of classical literature, but there is nothing ecpecial. The peculiarity of the style of Thomas Mann is that he is always beyond this formal perfection, his works change something in your soul. But reading Mario and the Magician it did not happen. Perhaps for me, like for many others, who have not seen the horrors that witnessed the generation of the 20th century, it is much harder to feel the nightmare of fascism. We just know that it was, we can feel its power through the printed words, films, stories, but we live at a time when humanity has awakened, and the nightmare has remained only a terrible memory. For that time, when the novella was being written, this work is more significant.

Yes, here it is, the evil, disgusting, self-willed, but very strong wizard Cipolla who can enslave people using his hypnotic ability, can seize the whole audience making it a crowd, and he can control this crowd, it can do anything he wants. Yes, it’s scary! And one Mario was able to resist hypnosis… Now I understand, yes – here it is, a harbinger of German (and Italian) fascism.