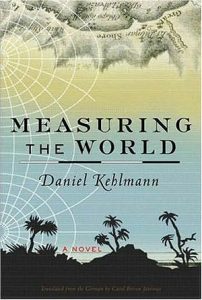 It is stunning biography. Really! I’m not a big fan of biographies or autobiographies and I read them not often. But this book amazed me and pleased me, despite the fact that I don’t know a lot about the scientists which are the main characters of the novel. Usually I read books about those people whose creativity and life I find interesting to me. I didn’t hear much about Gauss and Humboldt and the history of their lives was not interesting for me, because mathematics and science are not my favorite sciences, and these two scientists worked in these fields. So, it is a story of two great people, Carl Friedrich Gauss and Alexander von Humboldt. Two colorful characters, two men – the same and so different at the same time. The first one is optimistic, cheerful traveler, ready to cross half the world to reach his goals, he is also comic, cheerful and, of course, a happy man who always wants to know anything and to experiment more than it is necessary. The second one is the great mathematician who spends most of his time in the house. He lives for numbers. When he was nineteen years old he wrote his most brilliant work and already knew for sure that he would do nothing more remarkable. With such different natures, they have much in common. And the closer the old age, the more noticeable are their similarities. The sociable Humboldt and the father of the large family Gauss are in fact extremely lonely. No one can keep up with the speed of their thought, not many people can understand them. Only in time you realize that they do not really need it. There are only themselves and the facts. The facts that need to be written down, preserved, left for the next generations. Noticing the smallest details, they may not see that there is a war around. By giving their soul to science, they will never share themselves with another person, even if it is their own child. It’s scary to think that such people existed, but the whole world is grateful to them.