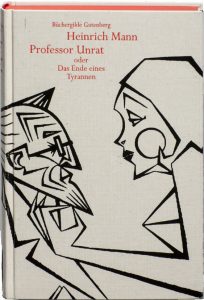 This novel can be called satirical, grotesque, because it ridicules the bigotry and spiritual inferiority of the school teacher, who imagines himself an Ultraman, bringing morality to people. In fact, he is an ordinary tyrant. He hates talented people, because he is small-minded and dumb.

The plot of Professor Unrat is very simple, very logical in its own way, but at the same time very versatile. The main character is the old school teacher Unrat, who hates everything around him and directs all his anger to his students. When he found that the most hated trio to him periodically visits the leisure venue the “Blue Angel” for the performances of an actress, he decides to find this place and catch his “victims” in the act. And getting acquainted with the actress he decides  to share with her a plan for revenge against the students. Strictly speaking, this is the whole plot, rather simple at first glance. But it’s not so simple. Each character, dialogue and thoughts of the characters are written so accurately and figuratively that the narrative looks real. And as an excellent dramatist, the author raises important themes of one man’s egoism, tyranny and human cynicism, directed at the whole of society. A teacher who thinks that he is better than his pupils, and even the population of the city, blames the surrounding people for depravity, becomes the representative of the depravity, which he deplores as it seems to be from his point of view.

Unrat’s obsession reminds is very much like paranoid schizophrenia. The whole city is full of enemies, and he is allegedly called by someone to suppress the rebellion and send rebels to the clink. Actually, the meaning of the teacher’s life was to catch the bastards in the act and expel them from the gymnasium. The failure of each inhabitant of the city this old man considers his personal victory. The paradox is that the ardent guardian of morality is in the very epicenter of immoral entertainment meetings with an actress Rosa Fröhlich. Sometimes I felt a little sorry for Unrat. Indeed, he was just an outcast in his city, and for the actress Fröhlich it is not so important who will pay for new dresses and treat her to dinner in a restaurant.