Tales of a Long Night

Tales of a Long Night 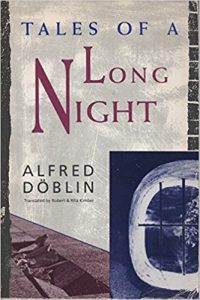 It is the final work in the work of one of the most interesting German writers. The work itself and especially its form are also intersting. There are no actions, except the ending. There are people, there are stories that they tell, which perfectly show their worldview. Let’s start with the main characters and the plot. It was the end of the Second World War. The main hero of the novel is a young guy who returned from the war disabled, without a leg that he lost during the war. Here you can immediately feel an unobtrusive motive of physical disability, passing through some works of Alfred Döblin (for example, Berlin Alexanderplatz), a symbol of renunciation of everything carnal. He, disabled, with a psychological trauma, comes to his home, where conflict is already taking place. And Edward acts as a catalyst. He inquisitively is looking for the truth, after finding which he is deeply disappointed. Once inside the walls of his home, he begins to notice that everything has changed for the worse (or everything was like that, but he did not notice). A father who does not need him, a mother who has not loved her father for a long time (and did she love?). Edward (the main character) is tormented by an obsession, who is to blame for the fact that he lost a leg, who broke the harmony in his house, who unleashed this bloody war that destroyed everything? One day, Gordon (his father) invites a few people who every evening will tell stories, which sooner or later, in his opinion, should return the son from the realm of nightmares into the real life. The work contains a lot of references to mythology, beginning from ancient Greek mythology and the medieval epos, ending with the Old and New Testaments. The structure of the novel is a cycle of novellas, based on ancient myths and legends. These stories to some extent reflect the state of affairs in the family of the main hero, everyone is trying to find the answer to their main question; each action, each thought is justified by purpose. Each story is a story of the patient who lies on the couch and tells it to the doctor who listens attentively. Through the family the author shows the post-war world: destroyed, broken, completely different. And in this world every person is looking for an answer to one question: what is the fault of people in what happened to the world, why they allowed to destroy it, break it?