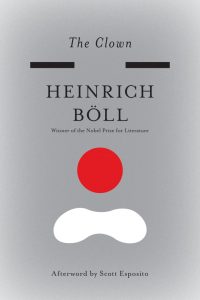 The whole novel describes a day in the life of the 27-year-old clown Hans Schnier, who recalled the previous seven years of his turbulent life. He common-law wife Maria left him, she was religiuos and didn’t want to live in sin, he experiences a personal and creative crisis, goes mad from depression, hypochondria and neurasthenia and cannot work, although his impresario says that that he is still welcome, but could a man with a broken life be a clown?

The Clown is a novel based on a conflict. Hans Schnier is a hero who is opposed to almost all traditional German institutions – the family, religion, society – in order to show how much they are struck by the hypocrisy, deceit, and careerism. Relations with his family turn into total mutual misunderstanding or hatred, he disgusts the duplicity of Catholics, even if they are ready to give him a helping hand, and he also disgusts the former Nazis who are seeking to correct the mistakes of the past. Contrary to the title of the book, I would not say that Hans Schnier’s profession is decisive for his image and worldview. It is unlikely that it would have changed, if he was a librarian, a coal miner or just a vagrant. I say it because different kinds of stereotyped images, for example, “a sad clown”, concerning him seem to me unfair and in many respects nullify his whole personality. He is not a clown Schnier . He is a man named Hans Schnier, his profession is a comic actor.

It would seem that the content of this novel can be connected with any of us in no way – let think how many clown there are in the world, and not from circus ones, but working under one-time contracts and … However, while reading there is a feeling that the book is written almost about you – was not there in your life a period of failure and stagnation, did not you end your relations with beloved people … And also this novel is very similar to confession – not that classical religious confession, but confession is like an open chest suddenly with all that has been acquired and lived and concealed. And another accent of the novel was the theme of Nazism and how the German man who had once sympathized with National Socialism is transformed …