The Decline of the West

The Decline of the West 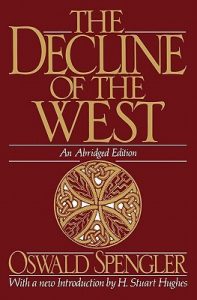 Oswald Spengler is a famous German philosopher, historian, one of the founders of modern philosophy of culture, creator of the cyclic theory, publicist. The Decline of the West is the main work of Spengler, whose sensational success made him famous around the world. Summarizing the richest archaeological, ethnographic and linguistic material, Spengler forced his readers to take a fresh look at the possibilities of traditional historical science and defined the place of Western European civilization in human history. In this book for the first time we can observe an attempt to look into the future of European culture was made. At the time it became a real culturological bestseller and was translated into many languages. For a wide range of readers.

It is very pessimistic prediction of the future of European culture. It is more interesting to read it a century later, having the opportunity to compare what was written with reality and to approach the work more critically. Sure, the work is impressive and interesting. Of course, it is difficult to imagine the study of culturology, philosophy, the religion of reference and in general the knowledge of the cultural space without the book of Spengler. However, is everything so bad in reality?

In order to understand the The Decline of the West, we must firstly agree that civilization is evidence of the decline of culture, the stages of dying, one might say, agony. Culture is a chaotic state of development, greed for knowledge, civilization is an orderly state of dying, the essence of knowledge. But then we must admit that the cosmos is the attribute of death, and the life died out together with the Big Bang, when order emerged from chaos. We, as people living during the civilization, of course, cannot properly assess the state of affairs. That’s why Spengler, in contrast to our historical view of the world, conducts a brief course of history of different cultures and civilizations, including those that lived in the moment without knowing the past and the future, such as the Greeks. He condemns our system “The Ancient World – The Middle Ages – New Time”, finding it fundamentally wrong and making the modern man guilty that he says that he does not care much about the ancient cultures, focusing on recent events, often not significant for the world process, bypassing the whole cultures.