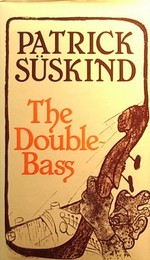 The protagonist is playing double bass for 18 years, he has a place in the state orchestra, stable salary with a stable pay raise every other year, fixed working hours and vacation days, and insurance. And he has this very double bass, made in 1910, which can be sold at a price to twice as for which it was bought, and that destroyed the life of his owner. Double bass is important bass instrument in an orchestra, and at the same time, double bassists stand always behind, being the most invisible, receiving the last applause. Double bass is one of the largest musical instruments, it is mobile, but it takes up much space, it is always in sight, he is watching you … Unfortunate musician may have the craziest thoughts. The main hero insulated himself from the whole world, locked himself in the sound-proof room, and said no to love, and all to his double bass, everything he is doing is because of it. In his room, the musician shares with us his own thoughts, feelings, talks about his life, about the musicians, the woman he loves. Different feelings are fighting in him, now he is praising his instrument, now he is scolding it, then he is satisfied with his life, then no, then he wants to be with Sarah then he thinks she is not enough good for him. He wants to change his life, but can he take the first step? … Patrick Süskind never played double bass, but he wrote so insightful, with a variety of all kinds of musical definitions and concepts that you believe that a real musician speaks to you.

“The Double Bass” is a story about a man who loves his musical instrument and at the same time hates it in some way. Everything is presented in a continuous monologue, which seems even a little insane and incoherent, because it is difficult for a person to speak to himself without hearing an answer. And it is about the main hero. His instrument is extremely important for the orchestra, but at the same time, no one notice double bass players. He plays, but no one hears him, no one can catch his sounds in the general flow of the melody. The author tells the reader about music, about the love for it and about what the main hero has to sacrifice for it. I think that this play is not only about the love for music, but also about hatred for it. After all, sometimes it turns out that you expect one from life, and you get another. For example, you want to be the first violin, and for some ridiculous reason choose a double bass to always stay back in the orchestra. But, it would seem, everything can be changed, it is only necessary to take a step, but when you get used to loneliness, to the cozy walls of your room, which become your friend, it is difficult to take this step. And the only thing you can do is to promise to do it.