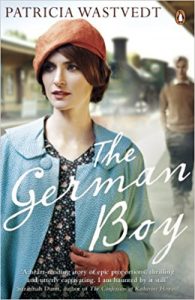 It is a rainy day of 1947, at the railway station in the English wilderness red-haired Elisabeth Mander meets her nephew, a German boy, whose mother died. Elisabeth is confused. What to expect from this teenager, who certainly hates the enemies of his country. But the reality is much more complicated. That evening a German boy gives Elizabeth a picture of a girl with long copper hair going through the sun, under the trees there is a cafe, and at the table a man sits and watches the girl. Elizabeth recognizes herself. But who is this man in the picture? And what does her German nephe, whose mental state is disrupted by Nazism and war, have to do with the painting of a Jewish artist? So, this way begins the story of two families in the background of historical events that were in Europe in the twentieth century. It is a slow, but powerful story about family secrets, betrayal and love with lyrically and precisely written out details of that era.

It is a story not about the boy. Or rather about the boy too, but more about his mother Karen and her sister Elizabeth, their friend Rachel and her brother Michael… About how young people loved, suffered, betrayed, loved again and suffered again, lost each other for years and again returned when their faces seemed to have completely erased from memory… And all this in the background of Europe, after the First World War and before the Second World War…

The German Boy is a delightful story about family, love, sacrifice, it covers several decades. The author, Patricia Wastvedt, skillfully intertwines the fates of many people, each character of the book is like a real person. And each character of the book seems to be a victim of circumstances. The lives of the two sisters seem to go very different ways, but all the same the fates of the sisters intersect, and this intersection is the artist Michael. It’s a fine, well-written family saga that can be recommended to all lovers of good books.

It is a deep, dramatic, surprisingly atmospheric and sensual novel, which, despite many heartbreaking moments, oddly enough, is completely devoid of sentimentality. As if someone wise, calmly and even with some note of doom, talks about events and fates, without tearing, when the wounds have finally begun to heal… The narration is slow, but not monotonous. Sincerely I hope that this book will soon have a lot of readers! With pleasure I recommend it to my friends!