The Land of Green Plums

The Land of Green Plums 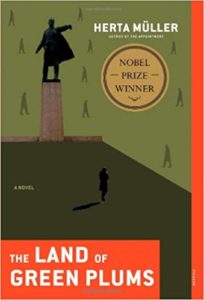 Perhaps people will never get tired of talking about hard times. Totalitarian regimes are a painful topic for the whole of Europe.

It is impossible not to mention that the thread of the narrative in this novel constantly slips out of the reader’s hands. The main heroine of the novel is an ordinary girl. Through her feelings, thoughts and deeds uncover consciousness, the uselessness of being in the system of total control, lack of incentive to create. Attempts by the main heroes to fight the system are too weak. For most of them, life ends tragically, only the main heroine manages to escape from the country.

In the novel, we are talking about Romania under the rule of Ceausescu, whom the heroine-narrator calls simply “dictator”. It is a dictator in general, an image of repression, an image of a hateful fear. All the atmosphere of the novel consists of hostels, whispers behind; claps to the pain in the hands, friendly “for”, because to be “against” – is deadly… Dictatorship does not need a lot – just to squeeze at least something from you and finish with you.

This book is rather complicated by the structure and mood. Although I think, this is exactly what it was designed to convey the emotions of fornication, fear, the presence of the Big Brother and a certain farce that occurs every day before your own eyes. It was not easy for me to understand this book, because I had to make my way through the author’s thoughts, often inseparable from the thoughts of the main characters. But at the same time, the book carries an incredible message and makes us think about what is happening around us.