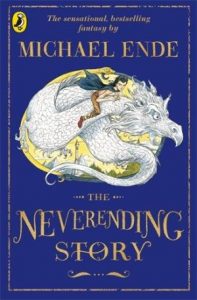 his mother died, and his father does not notice him. In fact, it is a real tragedy when a person can not accept the loss of a loved one that he begins to lost the reality. Bastian is nothing for his father. And then one day the father finds out in a completely practical example, that the reality can be different – his son can go to school and not return. As it turns out later, he didn’t get to school at all. And where did little Bastian go? Was he kidnapped? – No. Killed? Bastian steals a book at a bookstore. After stealing the book, the boy got delayed at the bookstore, accordingly, he was late for the lesson, frightened being laughed at, he did not want to go there and so he did not go to the school at all… The boy needs a refuge. What can be a better refuge than an attic? A terrible attic, where there are an old mirror, dusty candlesticks, a broken phonograph. These things make the attic magical. And Bastian is reading the book in the attic. He is reading until he does not get to its pages. But moreover, the characters are getting closer and closer to the reader, and now, the moment comes when they ask him for help. Bastian could not even imagine such a happiness. The country Fantasy needs him, he is a hero, a savior, a brave boy. He receives unlimited power, because you can do anything in your fantasies. Does it make sense to go back to where you are not really expected? And here ends a children’s fairy tale. And an endless story about how a person is finfing himself begins. And getting into the magical world, Bastian appears before quite a selfish man. Firstly he changes his appearance and abilities, he wants to become the best one… Then he was  under the influence of the evil witch, forgot about his friends, did not not understand his dependence and the fact that he needed help. And after all, you have to pay for everything, and Bastian pays for the fulfillment of desires with his memories … We are our memories, so he gradually loses himself without even realizing it.