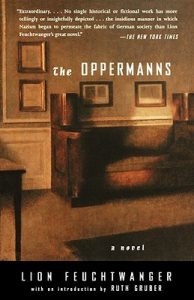 This book was written in the very beginning of the nightmare of the 20th century. Fascism has only just come to power, and has already done so much that has allowed to find material for the whole work! Honestly, when I read it, it seemed that all this was already written after all the horrors, when all the fascist acts were recognized worldwide, became known and analyzed in terms of crimes against humanity. So everything is fully and thoroughly described, that one can not even believe that it was created in such a short time. The novel begins in 1932 and consists of three thematic parts: yesterday, today, tomorrow. The novel tells us about the family of German Jews Opperman. They are honest, smart, they pay taxes, devoted to their country and work for the good of Germany. Their ancestors fought in the First World War for Germany, helped financially its government. They are righteous citizens who love and honor German history and literature, language. Therefore, until the last they do not notice that their beloved country turns into a monster. Jews are thrown out of the transport, they are forbidden to visit public places. And in schools fascism comes In the form of a teacher and prepares the ground for more decisive actions. People who lived in Germany throughout history, felt themselves to be Germans, loved this country, worked for it for good, suddenly turned into enemies, into something unnecessary. Many, like the family of Oppermann, until the very last moment refused to believe in what was happening. The author masterfully demonstrates the tragedy of an entire nation, using the example of a single family and the greatest number of behaviors and ideological principles. Someone will deny the reality, someone will try to become as noticeable as possible, someone, on the contrary, will try to hide, and someone will act decisively, despite the sad consequences. Everyone will react in his own way, will see what he will want to see until, somehow, he realizes with what and with whom he had to face in reality, and how terrible it is to be guilty without guilt, only because you were born someone who suddenly became undesirable. The novel remains relevant now, because history has a way of repeating. Simple and wise, without unnecessary emotions, but very realistic.