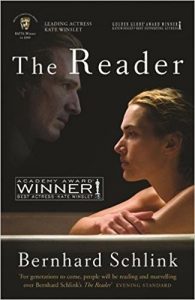 The book is not large, the plot is rather interesting, and so I have read it very quickly. The whole novel is divided into three parts. The first one is bright and sensual. Michael meets Hannah not under the most romantic circumstances. He could not imagine how this accidental will affect him. He is a 15-year-old boy, she is over thirty. He is a student, she is a tram conductor. What do they have in common? Not so few things – sex and books. She once helped him when he needed it, and that way the story begins. A 15-year-old teenager falls in love with a woman, who is now 36. But was it love? I don’t think so. The mutual satisfaction, but not love. I do not blame Hannah, but I don’t understand why she did it, is she really so lonely? Of course, Michael was inspired by his secret life after the lessons, and Hannah listened enthusiastically when he read to her out loud. But their affair did not last long. One day, Hannah simply disappeared.  Part II. Trial. It has been eight years since Michael saw Hannah the last time. And soon they meet again in the courtroom. Frankly speaking, this part was not interesting for me. I’m not very interested in the trials, so it was boring. Although there have been some moments, by which it was impossible to pass. The Second World War, the concentration camps, death … All these themes, of course, cannot leave anyone indifferent. Part III is the final and very sad. This part sums up the first two ones. The protagonist thinks about what a meeting with this woman gave him? How could he live if Hannah has not left her apartment eight years ago? I don’t know, maybe something would have been different, but I don’t believe in it. The place and time in which they live would not allow them to live in another way. The main heroes could not live together, but they also couldn’t live separately. When Hannah left, it can be said, she betrayed him. He did not see his future with another woman, Hannah was the whole world for him.

One of the most important themes of the novel is to accept your past. How to live in a country with such a history? With the history of Nazism, camps and world terror. It is said that this theme is presented in other novels by Schlink. The plot is interesting and intriguing. The book is beautiful by its truthfulness. The author tells only one truth: there is no truth anywhere, neither on the side of the accused, nor on the side of their judges. The book does not have the only conclusion, and there are no answers to the questions asked by the author. I do not think that we actually have a chance to understand how Hannah and Michael should have acted. In full accordance with the title, we only have to read this novel.